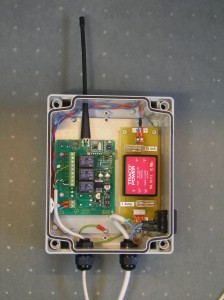 This remote control should be connected to an existing button control panel of an industrial door. By using this unit the industrial door could be opened and closed with small transmitter. The current button panel remains active.
Further transmitters may be added to the system. The range of the transmitter is about 100 meters. The system has an operation frequency of 433 Mc. and used a highly secure rolling code. This code is also used in modern cars for opening/closing doors and windows. With a loss of a transmitter he can be deleted from the memory of the receiver.

For extra security against burglary the receiver could be active by a programmed timer which is only operational during office hours. Also it is possible to connect the receiver with an existing alarm system. The receiver will automatically activate when the alarm is deactivated.
The complete system is made and developed in the United Kingdom (Keeloq).